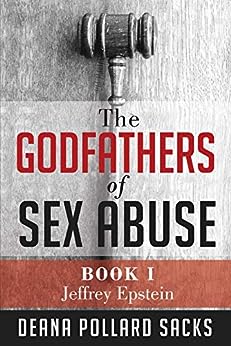 On July 6, 2019, Jeffrey Epstein became a household name as an international sex trafficker of underage girls, serial sex abuser, and confidant of the most famous, rich, and powerful men in the world. Barely a month after his arrest, he was reportedly found dead in his prison cell, supposedly by suicide. Numerous investigations are ongoing, to find out how he really died--but the public has been kept in the dark. 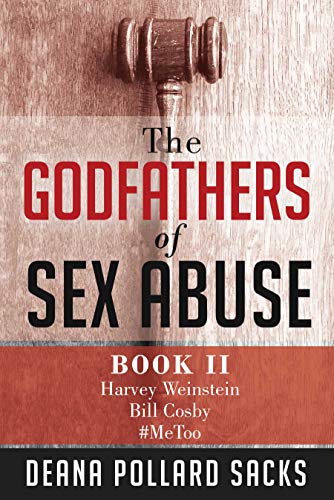 Following her first groundbreaking work, The Godfathers of Sex Abuse, Book I: Jeffrey Epstein, Professor Deana Pollard Sacks now takes on two other monstrous sex abusers: Harvey Weinstein and Bill Cosby. Sacks not only presents their dark stories of fraud, manipulation, and coercion, but she broadens the perspective to reveal the other types of abuse commonly aimed at women, simply because of their gender.

Get A Signed Copy!

For a signed copy of Book I: Jeffrey Epstein to be sent to an address in the continental US, send a check for $25 to Deana at the Sacks Law Firm, 2323 S. Shepherd Drive, Suite 825, Houston, Texas 77019. Please include your preferred name or nickname.

`The #MeToo Network is being created, to connect victims (female and male) to lawyers, researchers, and concerned citizens, and to pool resources to fight back against sexual predators and our failing system. It will be http://MeTooNetwork.com . #TimesUp. #godfathersofsexabuse`

"Praise for The Godfathers of Sex Abuse"

"Professor Deana Pollard Sacks has written the definitive book about the prominent men who used their power and money to abuse women. The book is meticulously researched and very well written and engaging. It is a stark reminder that decades after the feminist movement began, women are harassed and raped by men like these and those who enable them."

"The Godfathers of Sex Abuse exposes the truth about the entertainment industry, dismantles the concept of fame, shines a light on a multibillion-dollar business built on systematic misogyny, and urges people to wake up to the power they hold as citizens for change to help eradicate sexual assault. The book is a part of the #MeToo movement that has affected public discourse about sexual violence."

John Brittain, Professor, University of the District of Columbia, David A. Clark School of Law

"In this beautifully written and blunt book, Deana Pollard Sacks makes an excellent case for urgent reform by exposing the truth about Jeffrey Epstein, Harvey Weinstein, Bill Cosby, and these men's many powerful enablers. Sacks is a phenomenal writer and may prove to be one of the premier American authors of our generation."

"Professor Deana Pollard Sacks provides a scathing, detailed account of how rich and powerful perpetrators of rape and sexual assault are able to abuse the legal system and unscrupulously rely on their vast connections in a shameful attempt to escape justice. But with diligent persistence, Sacks gives voice to the voiceless by championing exactly how justice should ultimately prevail over these rapists if we, as a society, remain true to our stated belief that no one is above the law."

"An absolute page-turner ... documenting the crimes of the rich and famous and the systems that protect them, leaving victims with shattered lives and dreams."

"Professor Deana Sacks provides an extremely thought-provoking, powerful, and brave exposé of some of the most powerful sexual predators in the world. As with all her writing, she is direct, bold, and brutally honest."

You have to break a few eggs to make an omelette, and you have to step on a few toes to compile and expose the horrific truths of sexual abuse, manipulation, and financial privilege. Professor Pollard Sacks tenaciously fights for victims of sex abuse and here gathered the facts and stories we have read piecemeal and exposes them in a stark and coherent narrative. She is a champion for all victims.

The Godfathers of Sex Abuse

The Godfathers of Sex Abuse books detail the lives and ways of the most notorious #MeToo era sexual predators, Jeffrey Epstein, Harvey Weinstein, and Bill Cosby. Author and law professor Deana Pollard Sacks offers the most comprehensive look ever at these predators with an emphasis on their enablers and their master manipulation of the legal system and the press. After perusing court files, deposition transcripts, and hundreds of news reports, Professor Sacks synthesizes the material into an easy-to-read book that paints a full picture of the life and crimes of these twisted sexual perverts.

Epstein’s arrest must have caused anxiety for many powerful people. He surely wanted out of that horrible prison, and he had lots of ammunition against high-profile politicians and others—all those photos and videotapes that he labeled and preserved so carefully for a rainy day. The rainy day had come. As Julie K. Brown of the Miami Herald said, “There are probably quite a few important people…Keep Reading →

Jeffrey Epstein told several of his teenage sex objects that he had dirt on very powerful men—an “insurance policy” in case the need ever arose to cash in for his protection. The girls who had sex with various US politicians and foreign heads of state had to report back to Epstein details about the men, from exactly what their sexual preferences were, to what recreational drugs they enjoyed…Keep Reading →

For months, federal prosecutors Alexander Acosta and Marie Villafana of the US Attorney’s Office in Miami lied to attorney Brad Edwards to keep his clients in the dark about the status of the federal investigation into Epstein’s sex crimes. It was hardly an investigation, but more like a series of plays called by a three-headed quarterback: Alan Dershowitz, Jay Lefkowitz, and Ken Starr (with other…Keep Reading →

In March of 2005, a woman contacted the Palm Beach Police Department and reported that her fourteen-year-old stepdaughter had been lured to Epstein’s mansion by an older girl to give him a “massage” for $200. The going rate at that time for a professional in-home massage was $100. The older girl was paid $200 to bring the younger girl to Epstein. One scout brought a very pretty twenty-three-year…Keep Reading →

While Epstein was flying around with powerful men and climbing the social ladder in the early 2000s, he was also developing an intense sexual addiction to underage girls. He hid behind his phony image and abused girls on a daily basis, often two to three times per day. One of the Florida detectives would later peg Epstein as a “smart person” who’d developed an addiction for prepubescent girls…Keep Reading →

HOW DID JEFFREY EPSTEIN GET SO RICH?

The most likely explanation for Epstein’s incredible wealth is the extremely tight relationship he shared with Les Wexner, whose company owns Victoria’s Secret, Pink, and Bath & Body works, among others. Wexner, who is reportedly worth between $4.5 billion and $6.7 billion, became fast friends with Epstein and made him his “personal money manager” around 1987. The Epstein-Wexner relationship was…Keep Reading →

BOYS WILL BE BOYS

Jeffrey Epstein was a very bad boy. Or is he still? With a cavalier boys-will-be-boys attitude, the billionaire money manager and political A-lister expected to get off scot-free after molesting or raping dozens of underage girls. And for the most part, he did. In typical narcissistic fashion, he downplayed his elaborate, international sex-trafficking scheme, not long after serving a joke of a…Keep Reading →

Deana Ann Pollard was born in Tacoma, Washington in 1964 and attended public schools through the University of Washington. She received law degrees from U.S.C. and U.C. Berkeley, and became a full time law professor in 2000 with the Thurgood Marshall School of Law in Houston, Texas. Her legal scholarship has centered on implicit racial bias, children's developmental psychology, the risks of corporal punishment, the intersection of the First Amendment and dangerous speech ("speech torts") and civil liability for behavior in sexual relationships ("sex torts"). In 2007, she married David J. Sacks and became known as Deana Pollard Sacks. In 2018, she was notified that she ranks in the top 10% of all authors internationally on the Social Science Research Network based on the number of downloads and usage of her scholarship, and she is regularly recognized by ResearchGate for having the greatest number of downloads in her department. In 2019, she began writing books for the public in addition to her academic writing, beginning with The Godfathers of Sex Abuse series, centered on the modi operandi of Jeffrey Epstein, Harvey Weinstein, and Bill Cosby, and how the #MeToo movement is changing discourse about sexual assault. She can be contacted through the Sacks Law Firm in Houston, Texas.

Meet The Professors is a sociopolitical educational talk show created by law professor Deana Pollard Sacks for the purpose of bringing decades of research concerning social, political, legal, and other issues directly to the public in a conversational forum. As the executive producer and host, Professor Sacks chooses topics and guests to provide expert insight and a deeper understanding of issues important to the public, with a special emphasis on issues concerning children, adolescents, and young adults. Topics include how the media influences us, the effects of sexual and violent media on adolescents' brains, implicit bias and discrimination, bullying, the American sexual disease epidemic, and civil liability for sexual misconduct, i.e., sex torts.

In the #MeToo flurry of sexual abuse accusations, some of the wealthiest and most powerful men in America were accused of serial rape. The enemy has emerged, not as a few lone rapists, but a huge network of extraordinarily privileged men with many male and female allies. The three biggest #MeToo defendants—Jeffrey Epstein, Harvey Weinstein, and Bill Cosby—engaged similar complex and sophisticated modi operandi. Many people enabled them, including trusted prosecutors and popular movie stars. Victims, witnesses, and reporters were threatened and silenced. The men acted like mafia godfathers and avoided consequences for their crimes. But time’s up, and things are changing fast. Book II exposes Weinstein’s and Cosby’s similar corrupt schemes in detail, explains the depth and breadth of the #MeToo problem, and in the end offers suggestions for reform and hope for a better tomorrow.

The Godfathers of Sex Abuse, Book I: Jeffrey Epstein Released!

On July 6, 2019, Jeffrey Epstein became a household name as an international sex trafficker of underage girls, serial sex abuser, and confidant of the most famous, rich, and powerful men in the world. Barely a month after his arrest, he was reportedly found dead in his prison cell, supposedly by suicide. Numerous investigations are ongoing, to find out how he really died--but the public has been…Keep Reading →